Celestial island has been revamped and it has tons of cool new rewards and mechanics to improve your Idle Heroes lineup.

This guide will cover everything you need to know about buildings and statues on the Celestial Island as well as which order you should upgrade them in.

What is the Celestial Island in Idle Heroes?

Celestial Island is basically a way for you to passively gain tons of gold, diamonds and resources as well as stat boosts for your lineup.

You can spend gold and a special resource called Stone of Void to upgrade your buildings and statues in the Celestial Island to gain more rewards and boosts. You can gain stones of void by beating enemies in the Expedition mode on the island.

You can also gain Adventurers Medal’s from a special Adventure mode which can be used to upgrade stat boosting statues on the island. These stat boost function similarly to avatar frame boosts.

After you have accumulated half of the daily resources on a mine, it will stop production until you collect them. This means you should remember to visit the island at least a few times a day for maximum potential.

There are tons of buildings and statues which can all be upgraded using the Stones of Void that can be received from the Expedition.

It is important to know how much materials you might need in order to build certain buildings to the highest level. With new updates the maximum level caps for the three mines have been increased from 30 to 60, which allows for higher daily earnings, but also higher costs. 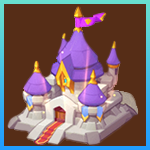 The Watch Tower is the heart of Celestial Island and is considered as your main island level.

You will need to upgrade the tower in order to build more structures as well as gain more rewards from more difficult enemies.

The maximum level for the Watch Tower is 20, which allows you to build the maximum amount of mines and statues.

Important! You shouldn’t instantly go for the highest Watch Tower level, as it increases the expedition monster difficulties as well. If you can beat any expedition island with one or two hits (1-2 daffodils), only then should you upgrade your tower. 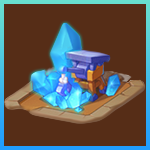 The three different mines in Celestial Island are the main ways to generate extra resources passively in Idle Heroes. They consist of Gem-, Gold- and Magic Dust mines.

The level caps for these mines have recently been increased all the way up to 60 in an update.

The price for levels ramps up significantly towards the later levels, which makes it important to prioritize what you upgrade first. 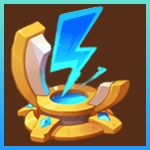 Statues are a new addition to the Celestial Island which provide various stat boosts to PvP battles, similar to avatar frames.

You can build up to 6 different statues when your Watch Tower is maxed out.

The difference with upgrading statues in comparison to mines is that they require you to spend Adventurer’s Medals instead of Stones of Void in order to level them up.

This means you need to complete the Adventure mode many times in order to get big boosts with these statues. 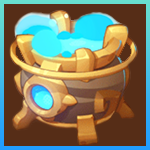 The furnace is another cool new addition to the Celestial Island which allows you to generate additional resources by using your excess Stones of Void.

The furnace has 5 levels, each of which unlocks a new resource you can buy.

Space Gems can only be obtained from the Furnace and they grant an extra hero slot to your bag.

Space Gems are the only thing you should be buying from the Furnace, but note that you can only create a total of 200 Space Gems. Still, 200 ‘free’ hero slots is a massive upgrade, especially for free-to-play players.

Celestial Island building priority is key for faster progress and more resources. Not all mines and statues are created equal.

When it comes to building mines, the new increase to level 60 has brought the price point of maxing out mines sky high. However, this has also increased the rewards for the higher levels.

The statues are also very important if you intend to focus on PvP, but PvE focused players won’t have much to gain from them.

The difference in statue upgrades is that it is a good idea to give around 10 levels to each statue first, as the first upgrades are so cheap and will thus give a more noticeable difference. After that, focus on the priorities mentioned below.

As mentioned in the beginning, only upgrade your Watch Tower if you can beat an expedition island with one hit, as a higher Watch Tower level brings on more difficult enemies.

As you might gather, upgrading the statues in any specific order is not too crucial and much depends on what your current team needs. Upgrading any of them will only benefit you and you shouldn’t worry too much on which order the statues are upgraded.

The mine build order is much more important to prioritize, as they will make a big difference in your progress.

Is Dismantling buildings on Celestial Island worth it?

Dismantling a building, statue or mine on Celestial Island will only give you a little more than half of the resources you spent upgrading it.

This difference will hit much harder at the later levels when you have spent over 100M gold and tons of stones only to receive half of it back.

This means, you should never dismantle any buildings in any case. It is just not worth it and you’re much better off trying to get that missing gold another way.

Remember, patience is key and you will have to level those buildings back up eventually, losing even more resources.